What is a Barramundi Cod?

The barramundi cod (humpback grouper) is a medium-sized fish which grows up to 70 cm. Its particular body shape makes this grouper quite impossible to mix up with other fish. Its body is compressed laterally and is relatively high. This stocky and strange visual effect is accented by its concave profile and its elongated snout which gives it a humpbacked appearance.

The young have a white background with round black spots and are continuously swimming head down. The adults have a body colouration with variances of grey and beige with darker blotches variable in size on the body. Small black spots cover the whole body.

Where is it found? 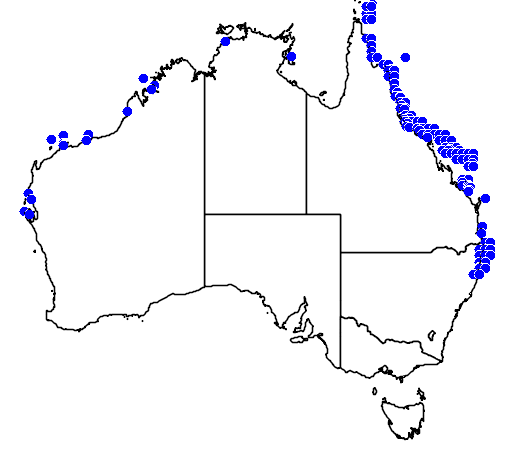 Why are they endangered?

The live reef fish trade is a particular threat to Barramundi Cod as it is so highly prized. Other threats include habitat loss and degradation, specifically of coral reefs and saline lagoons in which Barramundi Cod predominantly inhabit. Being a protogynous hermaphrodite (starting life as a female then changing to a male later in life) may mean the sex structure of populations is disrupted as larger individuals are targeted in the live fish trade, removing the crucially important breeding females from the ecosystem. In turn, this may adversely affect recruitment in this species.

Although the live fish trade fishery in Queensland is now closed and Barramundi Cod is protected locally under the Great Barrier Reef Marine Regulations 1983, continued research into the biology and ecology of this species is necessary in order to better understand important life history processes including spawning events. In turn, suitable protection measures can be implemented to prevent further decline. we can also make sure when we catch them we let them go with out harming them and also we can stop polluting their waters as much as we can.

the barramundi cod is a  Protogynous Hermaphrodite, this means that this fish starts of its life as a female and when it gets to stage in its life it turns in to a male. 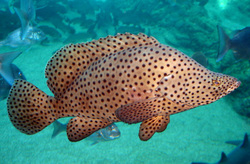 There are two sides to the existence of the barramundi cod. That of the fishermen and the environmentalists.
Firstly this fish is a great eating fish. Fishermen want to catch it to sell and eat. There are a lot of charter boats that would like to take others out and let them catch this fish so they can eat it.

Secondly the environmentalists have made it illegal to catch them because they will become extinct of over fishing. If you could catch them there would be no more left. The fishermen would let go of the small ones (the females) and keep all the bigger ones (the males), this means that there is no one to matte with the females. When they become males there will be no females to mate with ending in extinction.
Powered by