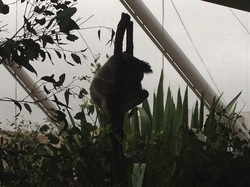 Koalas are a threatened species native to Australia. They eat gum leaves, which are low in energy so koalas sleep 20 hours a day on average. Koalas are a marsupial not a bear!

Where are they found?

Koalas are only found in Australia. They live in tall eucalyptus ( gum tree ) forests and low eucalyptus woodlands. This is both their home and food.

Why are they endangered?

Koalas are endangered because their habitat is being destroyed. Humans are the main cause of this by pollution, deliberately lit bushfires, human settlement and seeking resources. The loss of koala habitat has reduced their population from over 3,000,000 to less than 100,000. Since European settlement in Australia, 80% of the koala’s habitat has been destroyed. When koalas become upset and worried ("stressed") by the loss of their homes, they may get a disease called " Chlamydia".

Anyone can help save the koalas; from governments to ordinary people.

People can help by donating to foundations like The Australian Koala Foundation, being careful when driving on roads near koala habitat, participating in programs like 'plant a tree' and looking after our planet (recycling, not littering, decreasing pollution).

Some state governments in Australia have built special passages for koalas to pass safely above or underneath roads to reach feeding grounds. In Queensland, some speed limits have been lowered at certain times of day and year to minimise the risk of koalas being killed by vehicles.

Australia Koala Foundation is dedicated to the protection of koalas and their habitat. They believe that new laws should be passed that give better protection for koala habitats. They have been active in lobbying the government and making the public more aware of the dangers facing the koala. The Australia Koala Foundation make available a koala map, which helps educate people about koala numbers and locations.